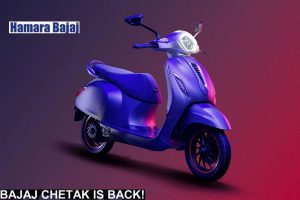 Bajaj Auto has brought the electric avatar of its iconic Chetak scooter. Bajaj has introduced the Chetak electric scooter under its Urbanite brand at an event held in New Delhi on Wednesday. It is Bajaj’s first all-electric scooter. Indian market Bajaj’s electric scooter Chetak will compete with Ather 450 and Okinawa Praise.

Range will be 95 km in Economy Mode

Bajaj Auto is going to launch its new electric scooter on October 16, the company itself has confirmed this by sending a press Invite clearly saying “Our tomorrow”, in which the word ‘Our’ addresses Bajaj Chetak while ‘Tomorrow’ means the car of the future, and we all know that the coming time will be electric vehicles. Let’s take a look at some special things related to this launch.

The ceremony will also be attended by two special guests, Union Minister of Road Transport and Highways, Nitin Gadkari and Neeti Yoga CEO Amitabh Kant. Now that these two dignitaries are present to launch all major electric and alternative fuel powered vehicles in the last few years.

According to the source, Bajaj has re-registered the scooter brand ‘Chetak’. There are also frequent reports about Bajaj Auto’s most popular scooter Chetak. The upcoming electric scooter will get modern features and a retro design. It is also believed that the new model of Bajaj can be named ‘Arbanite’. By the way, many of its pictures can also be seen on the social platform.

Bajaj Chetak Electric will be launched nationwide in a phased manner. The electric scooter will initially be rolled out in Pune and Bengaluru and will be sold through a pro-biking network. Without disclosing the price, Rajiv Bajaj, managing director of Bajaj Auto said, “We will keep Chetak Electric’s price competitive.”

Bajaj Auto stopped production of Chetak in 2006. Bajaj’s focus shifted to making bikes instead of scooters. But now scooter is more popular than bike in the market. It is believed that the new Chetak can have a glimpse of the old Chetak but it will also be designed according to the modern era.