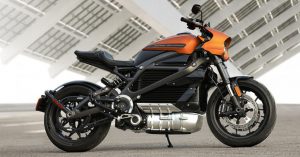 America’s bike company Harley Davidson had recently officially showcased its first electric bike LiveWire in India. Harley Davidson had unveiled this bike in the Indian market on August 27. 2019. It will be commercially launched by the end of 2019 or early 2020. In the United States market, the price of this bike is $ 29,800 i.e. around 21 lakh rupees, and in the Indian market, its price is likely to be between 32-35 lakh rupees.

The new Harley-Davidson Electric Motorcycle LiveWire offers a range of up to 235 km on a full charge.

LiveWire gets full LED headlamps and Sportster Fuel Tank. With this, all the elements within the tank will be electric. This bike has features like 4.3-inch TFT display, ABS and traction-control system with Bluetooth connectivity. The electric motor given in this bike generates 103.5 power and 116Nm torque.

This electric bike will get 15.5 kWh battery. The company claims that 235 km can be covered in the city by bike on full charge. At the same time, 113 kilometers can be traveled on the highway. According to Harley Davidson, this bike can accelerate from 0 to 100 kilometers per hour in just 3 seconds.

This bike is equipped with Rechargeable Energy Storage System (RESS). The bike has 7 riding modes, including Sport, Road, Rain, Range and three custom modes. Let us know that the company was first introduced in 2014 by this bike. However, the production-ready version electric bike was introduced in September 2018.

After launching their LiveWire to join the electric motorbike market, now Harley Davidson is planning to bring electric bicycles to the market.

“The 2020 Harley-Davidson LiveWire is an impressive achievement, and a massive gamble by America’s dominant motorcycle company. It’s a move that H-D had to make, and just a glimpse of what could be the brand’s future.”