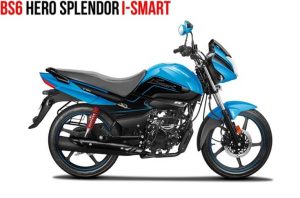 According to the press release of Hero MotoCorp, the company launched the first Splendor iSmart bike with BS6 engine. Hero is the first company to get BS6 certification from iCat. The new bike Splendor has been launched with an engine with 110 cc fuel injection technology. This engine gives a power of 9.0 bhp at 7500 rpm and 9.89 Nm of torque at 5500 rpm. At the same time, i3S technology has been given in it.

The Splendor iSmart has a new diamond chassis, so that it can be run in any kind of terrain. It has +15 mm front suspension, 180 mm ground clearance and +36 mm wheelbase. The new bike has been developed at the Center for Innovation and Technology in Jaipur.

The new motorcycle is designed to meet every challenge. It has a completely new diamond frame with large front suspension travel. It has the highest ground clearance for any road and has a large wheel-base. The new Contemporary and Youthful Splendor iSmart offers best-in-category value to its customers.

However, Hero did not give any information about the launch of Splendor iSmart. But there were reports that Hero is preparing to launch the bike with BS6 engine. After the Activa, Honda Two Wheelers was believed to be launching its most popular bike, the CB Shine SP 125, with a new engine. However, no official information was given on behalf of the company as they believed that its rival Hero MotoCorp could also bring the first BS-6 Hero Splendor BS6 bike. Significantly, Honda first announced the introduction of the Activa in the BS6 engine, but just a day before the launch date, Hero’s Splendor Bike BS6 certificate was received and Honda’s dream remained unfulfilled.

The new motorcycle will be available in Techno Blue and Black, Sport Red and Black and Force Silver and Heavy Gray color options. The new Splendor iSmart motorcycle will come in two variants Self Drum Cast and Self Disc Cast.

Hero Moto has launched Splendor i Smart, the country’s first BS-6 engine bike. Hero has launched its popular Splendor bike with a new engine. The company claims that this bike will emit 44 percent less carbon monoxide.

Hero Splendor iSMART present in the market has a great look. Especially the model has been updated keeping in mind the youth. Splendor has been in possession in the two-wheeler segment for years. Because it gets strong performance with stylish look.