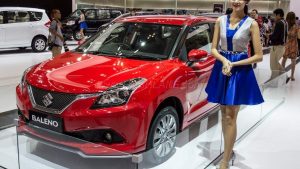 India’s largest Auto Car Manufacturer Maruti Suzuki India Ltd has sold 5 lakh Baleno cars since the launch of the premium hatchback 38 months ago, said the carmaker on Thursday. The Baleno, which was launched in October 2015, posted a 20.4% growth in sales in the April-October period this fiscal, the company said.

An official at Maruti Suzuki India has been quoted by news reports as saying that the engineers at the company have ensured that Baleno would offer superior ride and handling, class-leading performance and safety. It has also been revealed that the car is among the most sold from 2016 till date.

As lots of experts beleives that it may be the affordable price, despite Maruti positioning it as a premium vehicle and selling it only through its NEXA brand of higher-end showrooms.

The average ex-showroom price for Baleno is only around 5.5 lakh for the starter configuration, which is less than 5.6 lakhs for Dzire, which is sold through regular channels and not NEXA.

The car which was manufactured fully in India became the company’s first car to be exported to Japan from India. There were reports in August 2018 that the car will be the first to be cross-badged as a Toyota. The cross badging was as part of the global deal between two of the Japanese manufacturers.

As per the Reports suggested that the Baleno supplied to Toyota will be sold under its franchise in the first quarter of fiscal 2019-2020. Suzuki is expected to supply around 25,000 Baleno cars to Toyota annually. Prior to its sale as Toyota, some small changes and modifications will be made to its exteriors and interiors.

For example, both Swift and Dzire, the strongest contenders in the market. However, things changed over the last 12 months with the launch of the updated Dzire and Swift. Today, Dzire is perhaps India’s fastest selling car outside of entry-level segment, and is estimated to be selling at the rate of close to 20,000 vehicles every month. And on other side Vitara Brezza, priced around Rs 7.75 lakhs ex-showroom, is selling at more than 13,500 units per month

As per the reports on September 14, 2019 Toyota will manufacture the Suzuki cars at its plant in Bengaluru. The latest move will hereby broaden the strong association and corporation between both the companies.