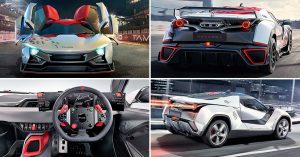 Indian auto giant Tata Motors has just unveiled its first sports car, under the Sub-Brand name Tamo named “Racemo”, at the Geneva Motor Show 2017. There was an enormous buss created around Tata Motors with the launch of the company’s first sportscar which can zoom from 0 to 100 kmph in under 6 seconds.

It also unveiled its next generation car in the compact category, sedan Tigor as well as SUV Nexon. Launching the concept in two variants — the Racemo and the Racemo Plus, Tata Motors CEO and managing director Guenter Butschek said, “We’re going beyond the borders of India, and here we’re presenting to the future of mobility.” It also further added “Symbolising the change that is taking place” in the auto maker, the two-seater sports coupe, the first product under its new sub-brand Tamo, is the India’s first connected car.

Tata Motors is in contentious process for new latest technology and development. Tata motors had always proved that their thrust of innovation will help them to regain their market share. Tata motors had struggled a lot in domestic passenger vehicle market from last 5 years. In order to be more focused they had launched Sub Brand Tamo which are low in volumes and requires low investment. It will add new value to the enterprise but still they had not confirmed that they are planning to setup a separate retail chain like its competitor Maruti Suzuki has done with Nexa.

Key Highlights are as below –

Tata Motors is going to make just 250 such models of this car, and it will be priced at around Rs. 25 – 30 Lakhs ex-showroom.

The new sports car was unveiled in the new leadership of new Chairman N Chandrasekaran and Tata Sons Chairman Emeritus Ratan Tata.Tata Motors has successfully HEXA earlier this year and are working very hard to push their next Styleback TATA Tigor. It was also reported by the management that it is planning for a mega launch of its First SUV Tata Nixon at the end of this year.