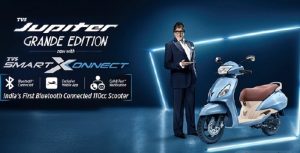 TVS Motors, the country’s leading two-wheeler vehicle manufacturer, has launched a new edition of its most popular Scooty Jupiter Grande in the domestic market.

The country’s leading two-wheeler manufacturer TVS Motors has launched its popular scooter TVS Jupiter Grande with a new updated feature in the domestic market. The company has used the SmartXConnect Bluetooth system in this new scooter. The starting price of this scooter has been fixed at Rs 59,900.

The starting price of this scooter has been fixed at Rs 59,900. Please tell that the company first launched the Jupiter Grand, but later discontinued it and launched the ZX variant instead.

In this system you can take advantage of features such as call, text message notifications, over speeding alert, helmet reminder and auto reply SMA. Apart from this, a record of ride data will also be recorded in it. Apart from this new system, the company has also introduced this scooter in new glossy blue color. It has a brown color seat, chrome on the front fender, rear view mirror housing, LED headlight and a premium instrument cluster.

The new Jupiter Grande can be controlled from the smartphone. For this, you will have to install an app in the phone. This will give you calls, text, alerts for over speeding and trip details. Apart from this, information on speed, trip meter and odometer readings and fuel levels will be available in the analog-digital instrument cluster of the scooter. At the same time, Jupiter Grand is available in only one variant (disc).

TVS Motors to Launch Electric Scooter with Solar Roof by 2022

In the new TVS Jupiter Grande, the company has used an air cooled OHC engine of 109.7 cc capacity. Which generates 8 PS of power and 8.4 Nm of torque. In both its wheels, the company has given a 130 mm drum brake, although its front wheel also has an optional disc brake. Apart from this, combi braking system is also included which provides safe braking even at high speeds. It is the first scooter in the country with a capacity of 110 cc, which has a Bluetooth connectivity system.

The engine is mechanically the same as the earlier model. It has a 109.7cc, single cylinder, air-cooled engine, which generates 7.99PS power and 8.4Nm torque.