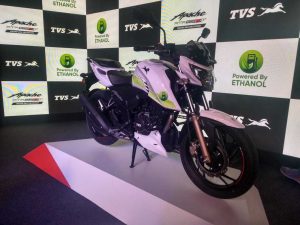 TVS has launched the country’s first bike with Ethanol. The price of this bike comes from the name of TVS Apache RTR 200Fi100 (TVS Apache RTR 200 Fi E100), which is 1.20 lakh rupees. It was launched in the presence of Union Road Transport and Highways Minister Nitin Gadkari and Policy Commission CEO Amitabh Kant. TVS Motor says this bike will run from Ethanol.

Ethanol has been successfully used as an alternative to petrol in markets like Brazil and can be particularly helpful in India, which imports crude worth $128 billion annually. Around 10 per cent of it – about $13 billion – is used by motorcycles alone.

company says that this bike running ethanol will reduce pollution compared to petrol. The special thing is that the bike will be sold in the states of Karnataka, Maharashtra and Uttar Pradesh.

What happens is Ethanol based Bike ?

ethanol is made from sugar fermentation process and is non-toxic. Ethanol is an alternative to gasoline, which is less polluting than petrol. Ethanol removes 35% less carbon than gasoline.

FEATURES
This bike has been given a 197.75 cc engine with Regular Apache RTR 200. This engine generates power of 20 bhp and 18 nm torque. It has a digital instrument panel that includes information like bike speed, odometer, trip meter, lap timer and gear position.

“For the last 12 years, I have been constantly saying that India needs vehicles run on bio-fuels, so I am glad that TVS has finally launched a mobike that is capable of running only on ethanol,” said Nitin Gadkari, minister for road transport and highways. “Pollution is a real challenge for us and this is the time to solve it. We need vehicles that run on bio-fuels as well as electricity to completely replace our existing fossil fuel based industry. This will not only reduce our oil import bill and save foreign exchange for us, it will also eradicate pollution from our cities.”