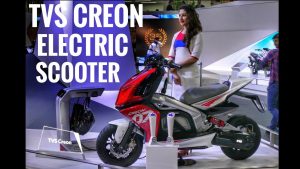 According to a media report, officials at TVS have confirmed at the Full Year 2019 Earnings Conference Call that the first electric two-wheeler from the company should be hitting the Indian roads in the current financial year. Several car manufacturers are also gearing up to launch their Electric Vehicles as soon as possible by next year and now it looks that the two-wheeler industry is now full fledged behind the development of practical electric scooters.

If you see history in recent past electric two wheelers have been on sale in India since long i hope if you remember Yo-Bike. However, they were not very practical and are restricted for city commuting. Recently, two new players in the form of Okinawa and Ather have been reported to be dominating the electric scooter market.

Now TVS plans to enter the market too which currently has no heavyweight two-wheeler manufacturer company in it. TVS in past been betting big on electric Vehicles and also has invested heavily in electric vehicles technology and more details will disclosed about its first EV just before the launch.

Currently only information which is reported is that electric scooter being developed by TVS will be based on the Creon concept electric scooter. Talking about the Creon, it was first showcased at the 2018 Auto Expo. It carried an attractive and sporty design which made it quite popular at the Auto Expo.

Apart from its sharp looks, the Creon was also filled to brim with features and technology which made it a smart scooter in true sense. It came with a smart connected technology that was jointly developed with Intel Corp. Further, it was equipped with a colour TFT instrument cluster that supported navigation and geo-fencing apart from regulars like speedometer, tachometer, odometer, trip meter and battery charge.

The model which was showcased at the Expo carried a red and white paint shade and looked rather cutting edge, to say the least. TVS made sure that the Creon didn’t lack in terms of hardware too and therefore equipped it with tubeless tyres, telescopic front forks, offset rear mono shock, LED lights all around, large under seat storage and a USB charger.

The battery pack also comes loaded with three lithium-ion batteries. It could be charged up to 80 per cent in just one hour, which boosts its practicality. However, the scooter had a maximum range of just 80 km on a single charge, which is considered as big disadvantage. As for its performance is concerned, the Creon had a 12 kW electric motor that encourages it to do the 0-60 km/hr run in about 5.1 seconds. A lot of these unique features will be carried on the new electric scooter TVS is developing and it is expected that the range will get a boost too.

It supports smartphone connectivity and can help you to connect your smartphone directly to the scooter via Bluetooth. The technology is called Smart Xonnect and it is also present on the company’s recently launched Ntorq 125 scooter.

TVS Motor Company is a betting big time for electric scooter and bikes manufacturing from India. Indian government is taking lots of initiatives to go electric for automobile industry since 2018 the biggest market for scooters, even bigger than China, and Government of India also wants to prohibit the sales of scooters and bikes which runs on petrol and diesel as fuel by 2030. TVS will launch several new electric scooters in the coming years.