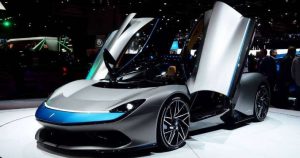 When it was finally unveiled in 2020, the Battista will be the most powerful car ever designed and built in Italy, Automobili Pininfarina said.

The Battista’s 120 kWh battery pack which comes from Rimac has cylindrical cells. The battery pack is located along the center tunnel, in the rear.

The Pininfarina Battista is having a capacity to touch top-speed over 350 kmph, making it faster than most Ferrari cars today. It touches 0 to 100 kmph is achieved in less than 2 seconds and 0-300 kmph in less than 12 seconds.

The interior of the cabin is inbuilt with high end technology as well. It features two screens with steering wheel angled to face the driver with the centre screen.

The Battista’s suspension is tuned specifically to deliver a mindful experience. The driver can electronically adjust the dynamic experience through multiple modes tuned to a range of driving scenarios.

“This is the most authentic and exciting automotive story imaginable. The Battista is the hypercar of the future, inspired by a legendary past,” Automobili Pininfarina CEO Michael Perschke told in an interview.

Electrification unlocks the door to a new level of performance and a zero-emissions future, whilst a passion and respect for automotive history will define how this landmark car looks and feels, he added. 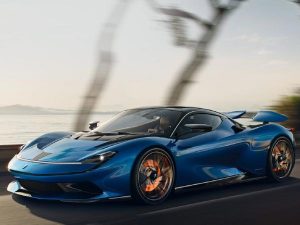 “We aim for the Battista to be a future classic and automotive icon, writing its own page in automotive history books,” Perschke said.

No more than 150 Battistas will be hand-crafted in Italy and allocated equally between the regions of North America, Europe and Middle East/Asia, Pininfarina said.

Customer service will be delivered through some of the world’s best luxury car retail specialists, from Los Angeles to London to Tokyo, it added.

Currently Mahindra & Mahindra is not only having major stakes in Pininfarina, But Mahindra’s automotive division also owns South Korean car company SsangYong Motor and even runs a team in the Formula E racing series.